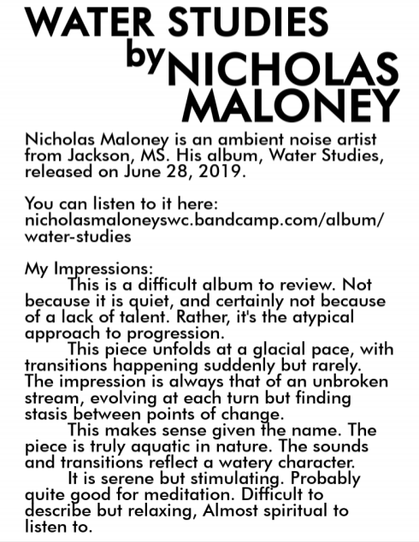 ​Review by TJ Norris of toneshift.net
Somewherecold Records (CD/DL)
Mississippi-based Nicholas Maloney brings his debut solo EP via Somewherecold Records, two Water Studies (Study for Moving Water and Study for Still Water). It’s also limited to only forty-five copies if you dig bespoke handmade and numbered discs. Recorded in Iceland as well as on the Pearl River in his home state, this starts off kind of like a muffled babbling brook of some sort. And though he utilizes field recordings, his interpretation is universally quite of the electronic ilk, down low drone that is rather soothing for the most part. As it ‘flows’ things become more fluid and lucid. And suddenly there’s an exhaust valve that lets go, with a coarse hiss, and these textures begin to change in multiple stages, quieting and deepening.
​
A break of silence then leads to a gentle distant rumble, like a massage of whitenoise. As it howls mildly, like the vibration on a windscreen, one might imagine a still low tide by the end of this sonic work that runs nearly seventeen minutes. Study for Still Waterhas a submerged feel. A very introspective listen, even with distant sirens and its looping, raspy cadences. And as the final stretch begins there’s a balance between open air and perhaps a soft rain that drifts off fairly quickly. A rare very immersive and subtle record.