Review by Listencorp
Published July 10, 2021
Shrouded ambience stretches out into a palpable gloom created by inventive sampling on this release.

A thick vapour of sound pours in rapidly, moistening the silence that had preceded it. How Many Times Have I Died Here Before? is rich with emotion from its very beginning. As we travel through the characterizing loop, we find each twist and turn in melody brings more sadness and solemnity. One imagines a tumultuous and tear-stained sleep, plagued by one lone repeating vision, blurred by the menagerie of dream. The listener is enveloped by the track. Built upon fragments of mostly forgotten melodies, the two-track EP uses samples taken from a string quartet’s performance of an arioso. An arioso is a solo vocal piece, usually taking place in an opera. This at least gives partway of a reasoning as to how Blanket Swimming produce such a sublime and emotive sound. As we are lulled gently by the notes, the cadences feel reminiscent of a voice. The way the melody winds in on itself at the end, the sustained note slow in its attack. It has the control and nuance of a vocal performance, transformed by the string quartet and subsequently buried in Blanket Swimming’s incredible sampling.
Finally Standing Still sets out a more direct path. A soaring high note, just short of screeching euphoria, pushes toward and away from the listener as if they stand on a gently rocking boat, watching a lighthouse illuminate the dense fog. Augmenting notes weave their way past the travelling note, tinging it ever so slightly. Again, that dreamlike quality is present. The track stands before us, the movements happening just far away enough to be uncanny and unnerving.

The slow pulse and throb of Arioso feels as if it has been moving for an eternity; some great, cloaked force shrouded in darkness. The length of each track gives credence to this feeling, as Blanket Swimming stretches these soundscapes out with such confidence, inviting the listener into this ink-black odyssey. If listened to in the right mood and moment, Arioso provides an intensely cryptical experience.

Review by Gert Derkx of Opduvel​
Published July 5, 2021
[Translation from Dutch to English:]

Jackson, Mississippi native Nicholas Maloney tirelessly continues to release music. The current calendar year is just over and the American has already released three albums under his own name, an album together with Claudia Barton, Mark Waldron-Hyden and Peter Venus, two albums under the name Thar Desert, a split tape with Varsás Gábor, Andy Klingensmith and Estlin Usher and seven albums as Blanket Swimming, including one with Gallery Six. And it may just be that something has been overlooked in this summary.

So there is no shortage of productivity and as long as this is not at the expense of quality, there is little to complain about. Maloney is bursting with ideas, which he shapes in his own way. Different aspects of his music are released under different names, although there is a noticeable stylistic overlap in the music that is released under different names. The name Blanket Swimming is used by Maloney for his experimental ambient/drone compositions, using guitar, synthesizers, tape manipulation, field recording, voice and other instrumentation.

An Arioso is a piece of music for solo vocals and instruments that is mainly used in Baroque music. It is an intermediate form of a recitative and an aria. Blanket Swimming's album Arioso consists of two pieces, both based on a loop. Both works are built on fragments of an arioso performance by a string quartet. By applying his own musical arrangement to this, Maloney creates his music, in which the string quartet remains recognizable as such, but is embedded in a different musical environment, resulting in two new compositions.

You can classify those two compositions under the heading of ambient/drone. Both pieces look quite calm, sound melancholy and have an emotional effect, but they also differ markedly, especially when it comes to movements. In 'How Many Times Have I Died Here Before?' a melody of the string quartet can be recognized. The string sounds flow down to the listener in waves. Incidentally, the entire piece consists of wave movements, because in addition to the string melodies rendered in this way, sea waves can also be heard. The piece is always in motion, has no climax and no plot; it is the undulating movements that determine the musical course, mastered and 'in control'.

That sounds like a deadly boring soundscape, but nothing could be further from the truth. Blanket Swimming's music contains emotion, perhaps even drama. Where, on superficial listening, the music constantly makes the same movements and undergoes only a minimal development, in reality everything happens, even if part of it happens in the mind of the listener. Maloney mixes his sounds in different ways, subtly but very decisively, by layering, bringing dark tones to the fore and directing them back into the background, and by interweaving melodic motifs. As a result, boredom has no chance to strike. In addition, there is the great emotional impact that the combination of strings, synths and natural sounds produces. The sadness drips from the piece.

'Finally Standing Still' is a well-chosen title, because compared to the first track on the album, the music does indeed seem to stand still. That is of course an illusion, because here too there is more going on than a first superficial listen suggests. There is no string melody that runs like a loop through the entire piece. The strings are still clearly recognizable, but as a drone that is the constant in the work. To that extent, there is no tempo. However, the work is not completely static, but moves very slowly. Due to the sounds that Blanket Swimming creates around the string drone, the drone is pushed slightly, as it were, resulting in a movement forward, at least the suggestion of this.

Just like the first piece, 'Finally Standing Still' has a melancholy tone. The American achieves this not by introducing darkness into his music, but by stacking the layers in such a way that they form a timbre that creates a melancholy mood. In this second piece this is even more apparent than in the first, which is not a value judgement, by the way. The more abstract form that Maloney chooses here manages to strike a chord in the same way as the first work, which is more mobile and with a melodic aspect. As the piece progresses, there seems to be a little more movement in the music, sounds detach from the layered drone to come to the fore for a moment. Sometimes the question is whether it actually happens or in the mind of the listener.

Blanket Swimming creates two soundscapes on Arioso to completely immerse yourself in, where one listen is not enough to comprehend everything that is happening, while apparently not much is happening at all. The overall mood remains the same, but the music contains so many layers, sounds and finer points that you just can't get tired of it.
Review by Giuseppe Vitale of Radioaktiv
Published July 2, 2021
[Translation from Italian to English:] 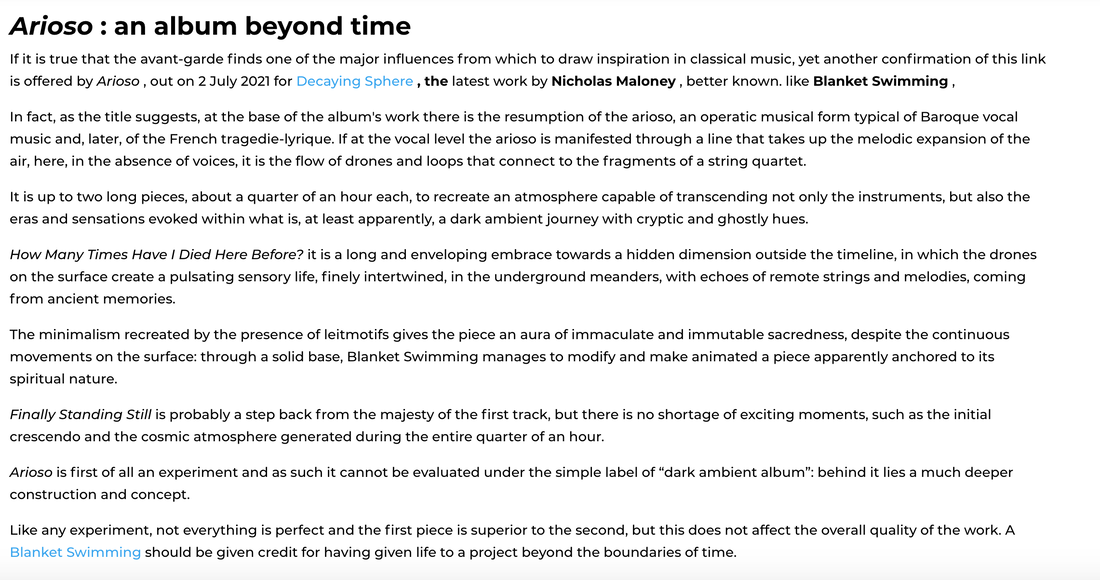