[English:]
Troubled hours.
Difficult to align a few lines, out of context.
Difficult.
Difficult to see only one surface, an overview of it.
Very happy "chance" of "circumstance" that this lightning gallery
of Mr. Nicholas Maloney and Dominic Razlaff who, by this very and very probably less happy "chance", could so easily "disappear" from a world, which is still presently that of before.
Vicissitudes of space-time gaps? (Oh la la).
Heralding a now operative falsification of the history of our evidence?
But above all - Let this pure nugget remain: "Magnanimity". 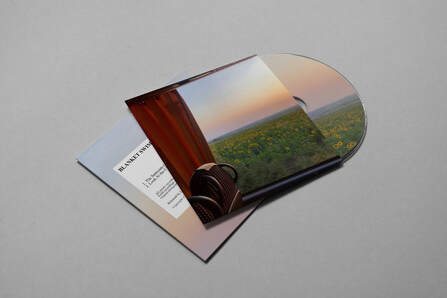 I have to admit the name Blanket Swimming threw me. I had expectations of the style of music based on 80’s synth styles from people born well after the fact, you know the whole “looking through the prism of the past from things I have read about / heard”. Instead what you get with Blanket Swimming’s album is two long form pieces of subtle, glacial paced ambience that feels like a perfect sort of soundtrack for the uncertain times we live in. It can be difficult in describing pieces like these as they rely on such small movement of sound, sometimes spread out and using repetitive phrases as a major part of their pieces.

With the title track Maloney uses delicate drones which are almost like gentle waves with melodic tones and ever so slightly plays with the textures and intensities and he infuses the piece with a variety of field recordings. Maloney is no rush which allows him to build and work on his piece over the duration. This is also felt on “Look At The Cypress In The Courtyard” which has a more classical meets William Basinski feel and shows Maloney at his best as he creates build up after build up with slight dips in the intensity of each section. As the piece progresses you begin to notice the ultra subtle changes in the sounds and how the attention veers from sound to sound as well as barely noticeable degradation which tends to come into focus in the last third of the piece.
​
With these two piece Maloney while not re-inventing the wheel, clearly shows that he is adept at the more minimal forms of music which can be used to calm the listener as much as they can transport them away. The two pieces have their own essence while retaining a similar kernal of an idea. With what is happening now music like this becomes somewhat of a release. “The Sunroom” is available on limited  CD (60 copies) and Digital.

[English:]
An instant that crystallizes becoming an expanded jumbled surf, without boundaries and temporal definition. Memories transformed into dilated sound reverberations are those that inform the two long flows collected in the new work of Nicholas Maloney under the alias Blanket Swimming, vivid sensations set to become indelible traces of one's own experience.

Sinuous synthetic currents evolve placidly building a double emotional path inspired by different visions, united by the same impact. Quiet and bright, the first of the two tracks, which gives the album its title, develops as a rarefied immersion in memory from whose warm evanescence fragmentary environmental trails emerge, creating a silent and enveloping gait that leads to dreamlike and refreshing territories. The subsequent drift is nocturnal and melancholic, marked by an obsessive cyclical trend and permeated by subdued restlessness, a stubborn and stunned progress that slowly dissolves, leaving its echo reverberating in the terminal silence.

Blanket Swimming - The Sunroom
Review by Visual Complexity.
​
"'The Sunroom' is a light and peaceful journey of nature and your most cherished memories. The artwork is absolutely perfect for the theme given, which allows you to imagine yourself there. The title track is just unforgettable."
Nicholas Maloney - Sombuse (2019)
​Review by Frans de Waard on Vital Weekly

Also, a new name for me is Nicolas Maloney, from Jackson, Mississippi and who works in
the "areas of drone, ambient, musique concrète, and electroacoustic music [...] He is interested in
the interaction among texture, sound, and space". He has had some releases out on Warm Milk
Recordings (his label), Green Field Recordings, Somewherecold Records and Humanhood
Recordings. He also works as Blanket Swimming and Sleep Silver Lightning, and as a "guitarist/
vocalist for experimental/post-rock band, The Empty Handed Painters as well as the guitarist/
vocalist for experimental/lo-fi/garage-rock/noise rock trio, The Villetown Mountain Army Brigade".
The work he releases under his name deals with field recordings, found sounds and the
manipulation of both. Following the blast just delivered by Chlorine, this is a wealth of calm
sounds. Much of it deals with a very quiet approach and things can be near-silent for a longer
time. Here one has no idea what the field recordings originally sounded like, such as the level of
processing here as well. But unlike Chlorine things aren't blown out of proportions, but it also
sounds very subdued. Like it has been covered with a blanket, muffled away and occasionally
this blanket is so thick there is hardly any sound. In 'Persune' Maloney uses the form of start/stop
collage to produce this before going into a droney field. "Balline' and 'Solast' are straightforward
pieces of drone music, slowly fading in and out, sounding like a massive storm approaching and
leaving. In 'Quiete' the wind blows also but in quicker curves. I very much enjoyed the subdued
character of all of this and Maloney's daring move to include quite a bit of silence.
Blanket Swimming - Perpetual Seeds For Fleeting Time (2019)
Review by ISSUES Magazine: 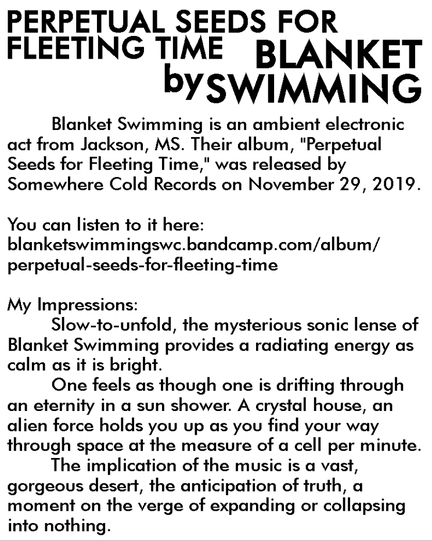 Before you hit the play button below, read this and try to imagine what the music may sound like:
“Perpetual Seeds for Fleeting Time explores 6 unique methods of composition with a unifying thread of present non-dualism and the expounding of heavy emotion through a fluid stream of expressionistic soundwaves.” Got that? Now hit Play.
Personally, I have no clue what “a unifying thread of present non-dualism” means, but I cán imagine what “(heavy) emotion through a fluid stream of expressionistic soundwaves” may sound like. And listening to the album confirms my thoughts.
Blanket Swimming is Nicholas Maloney from Jackson Mississippi. He releases his music under his full name and various aliases: the Blanket Swimming alias is reserved for exploring experimental/ambient/and drone compositions. He has released albums under this name since 2015 (four albums in 2019 alone, one of which is Perpetual Seeds..).
The methods of composition on this album include guitar, synth, voice samples, the recorded resonance of rooms, contact mic’d hollow guitar bodies (to pick up external vibrations), and a recorded stream.
The result are (six) compositions that indeed are quite emotional. The extent to which these emotions are heavy or expressionistic (as opposed to impressionistic or introvert) is in the ear of the beholder.
Blanket Swimming - "Empty" from Perpetual Seeds For Fleeting Time (2019)
Review by ISSUES Magazine: 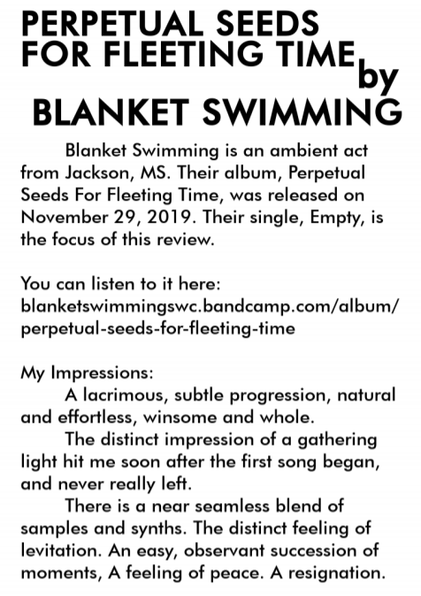 ​Nicholas Maloney | Water Studies
Somewherecold Records (CD/DL)
Mississippi-based Nicholas Maloney brings his debut solo EP via Somewherecold Records, two Water Studies (Study for Moving Water and Study for Still Water). It’s also limited to only forty-five copies if you dig bespoke handmade and numbered discs. Recorded in Iceland as well as on the Pearl River in his home state, this starts off kind of like a muffled babbling brook of some sort. And though he utilizes field recordings, his interpretation is universally quite of the electronic ilk, down low drone that is rather soothing for the most part. As it ‘flows’ things become more fluid and lucid. And suddenly there’s an exhaust valve that lets go, with a coarse hiss, and these textures begin to change in multiple stages, quieting and deepening.
​
A break of silence then leads to a gentle distant rumble, like a massage of whitenoise. As it howls mildly, like the vibration on a windscreen, one might imagine a still low tide by the end of this sonic work that runs nearly seventeen minutes. Study for Still Waterhas a submerged feel. A very introspective listen, even with distant sirens and its looping, raspy cadences. And as the final stretch begins there’s a balance between open air and perhaps a soft rain that drifts off fairly quickly. A rare very immersive and subtle record.
Blanket Swimming - Lighten ​(2019)
-Review by ISSUES Magazine:
​ 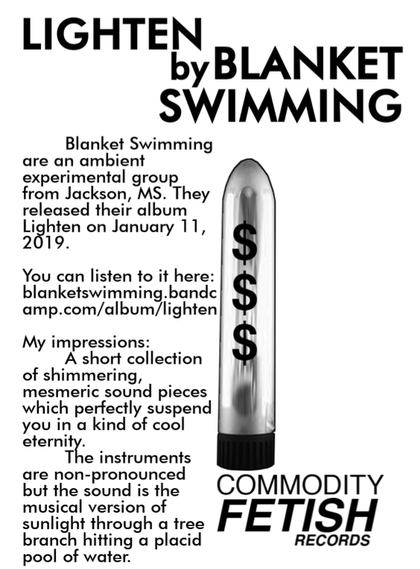 Blanket Swimming
Open Colour (Histamine Tapes; CS/DL)
Mississippi sound project Blanket Swimming (Nick M.) has just put out their second release on this limited edition cassette (ed of 30) on Vermont’s slow-growing Histamine Tapes. It’s a dusty buzz Western guitar drone, layered with a slow-roasted harmony. Each track, Open Colour pts. 1-5 build on each other nicely in the chasm ‘tween shoegaze and industrial collapse. The is one of those ambient/noise records that often slips through the cracks because of its limited release, and even though this is on the darker side of the spectrum, don’t let it lose the light edge of your eardrums.


WARM DRONES + PEDAL TONES: From the looks of it, this handmade edition even sports multiple options when it comes to cover art, giving it even more of an underground art flair, “with hand cut j cards from Barre Granite Museum brochures.”  Once into part three things become rapt with watery field recordings and a dynamic clash between layers, while maintaining a rather low, mostly ambient profile. It’s a stratified, flowing drone that has a scintillating improvisational quality. There are also distant bellowing vocal treatments which are like the ghosts of the Beach Boys’ past.


One thing I find most appealing on this tape is the collage techniques that blend the coherent edit with raw, physical, homemade manifestations. It’s as if I’m meant to hear the musicality while being allowed to see the seams, the process. But like all interesting compositions this only allows snippets to tease you, back and forth, playing on your sense of awareness and lightness of being simultaneously. This set of treatments is most sublime on Open Colour pt.4 – a truly elusive and beautiful work, bathed in erosivity. There are a thousand voices built-in, based on introspection, memory. Finally on part five a forlorn set of drunken strings rise from the ashy drone, eclipsing the mood like a lullaby for the dead. It’s timbre is ambiguous, it’s pace is all forward motion, like a river running dry into the freeze of Winter.

Blanket Swimming has the rare talent of straddling both melancholy drones and uplifting melodies which is honed even further on the release, Open Colour. The album’s opening track features a pulsing bed of sound slowly morphing into anxious synths through the track’s two-minute run time. As Open Colour progresses, Blanket Swimming conjures melodic soundscapes exercising the construction/ destruction of stereo drones with found sounds and ethereal vocal loops striking lasting emotional impressions. Nick’s use of field recordings in harmony with instrumental sections results in a dreamlike tug-of-war with the listener’s ears. Open Colour’s masterful closer breathes a sum of emotions found in one thoroughly composed eight-minute track. Blanket Swimming’s control over soundwaves resonates emotionally and subconsciously throughout Open Colour. I have a feeling each revisit of Open Colour will yield a new discovery.

Blanket Swimming is for fans of serious drones,
moody shines and the glint and glisten of
fluid sound waves. A study in form, flow
and texture, Blanket Swimming shows
the shifting sands of ability, and
talent through unearthed
audio treasures on this
wonderful recording.
Goodnight Jungle. ​